On International Day for the Elimination of Violence against Women and Girls, hear from grant holders Afghanaid

With an Impact grant for their project entitled ‘Empowering Afghan women to reduce poverty and promote equality’ the organisation aims to empower vulnerable women in some of the most remote areas of Afghanistan.

This is what Afghanaid had to say about the challenges to their project:

“Although the protection of gender rights has made significant legislative progress in Afghanistan over the last decade, the country continues to be one of the most difficult places in the world to be a woman. Women and girls still face major barriers to education, employment, and participation in decision-making processes in their own homes and communities.”

“As a result, they have very little influence over the issues which affect their day-to-day lives the most, for example marriage and family planning. Perceived as bearers of male and community honour, women frequently face violence if they go against established gender roles. More than 87% of Afghan women and girls still suffer from at least one form of abuse, ranging from physical or psychological violence, to forced marriage.” 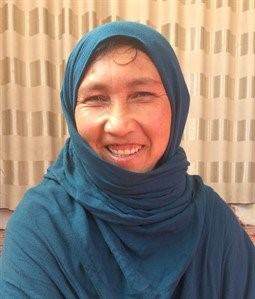 This is Zahra (pictured).

She lives in a remote rural village in Ghor province. Afghanaid is supporting Zahra to establish her own small business by giving her equipment and training in a vocational skill, as well as training in enterprise development, basic literacy and numeracy, and financial management.

Through this project, Zahra will gain the skills and resources to earn an income and lift her family out of poverty.

“We know that when women in rural Afghanistan start to bring money into poor households, they gain greater respect from their male family members. We will also be teaching the women about family planning and reproductive health. Once they have a greater knowledge and understanding of these topics, they will be able to harness their improved social standing to influence decisions over family planning and the early marriage of their daughters.”

Zahra was just 14 when she was forced to married her husband. He came to her father one day to ask for her hand, and he agreed without consulting her. One month later the marriage took place. The marriage has not been a happy one for Zahra.

“Thanks to Afghanaid, women are becoming more educated and our entire community is becoming more aware of women’s rights, including issues like early and forced marriage, as well as family planning. I was not so lucky. On my wedding day I was very sad to be taken away from my family to live with a man I did not know, and this is not the future I want for my daughters.

“My husband and I have seven children. He wanted to have a big family. He wouldn’t allow me a say in the matter. He does not have much respect for me so I would not have been able to change his mind.

My husband has problems with his knees, which leave him unable to work and we have struggled to provide for our large family. I would like to be able to afford education and nutritious food for my children, but at the moment I cannot.”

To Zahra, education and getting into work are the key to improving the lives of women like herself.

“If women are educated, if they earn an income and contribute to their family, they will get more respect from their husbands. With Afghanaid’s help, I hope to learn a skill and get into work, so that I can provide for my family and have a better relationship with my husband and sons.”

Afghanaid will also be working with male family members and mothers-in-law to increase their understanding of women’s issues. In this way, the entire community can stand together to improve gender equality and the long-term alleviation of poverty.

To find out more about Afghanaid’s work, visit their website at afghanaid.org (link to charity’s website, opens in a new window) .